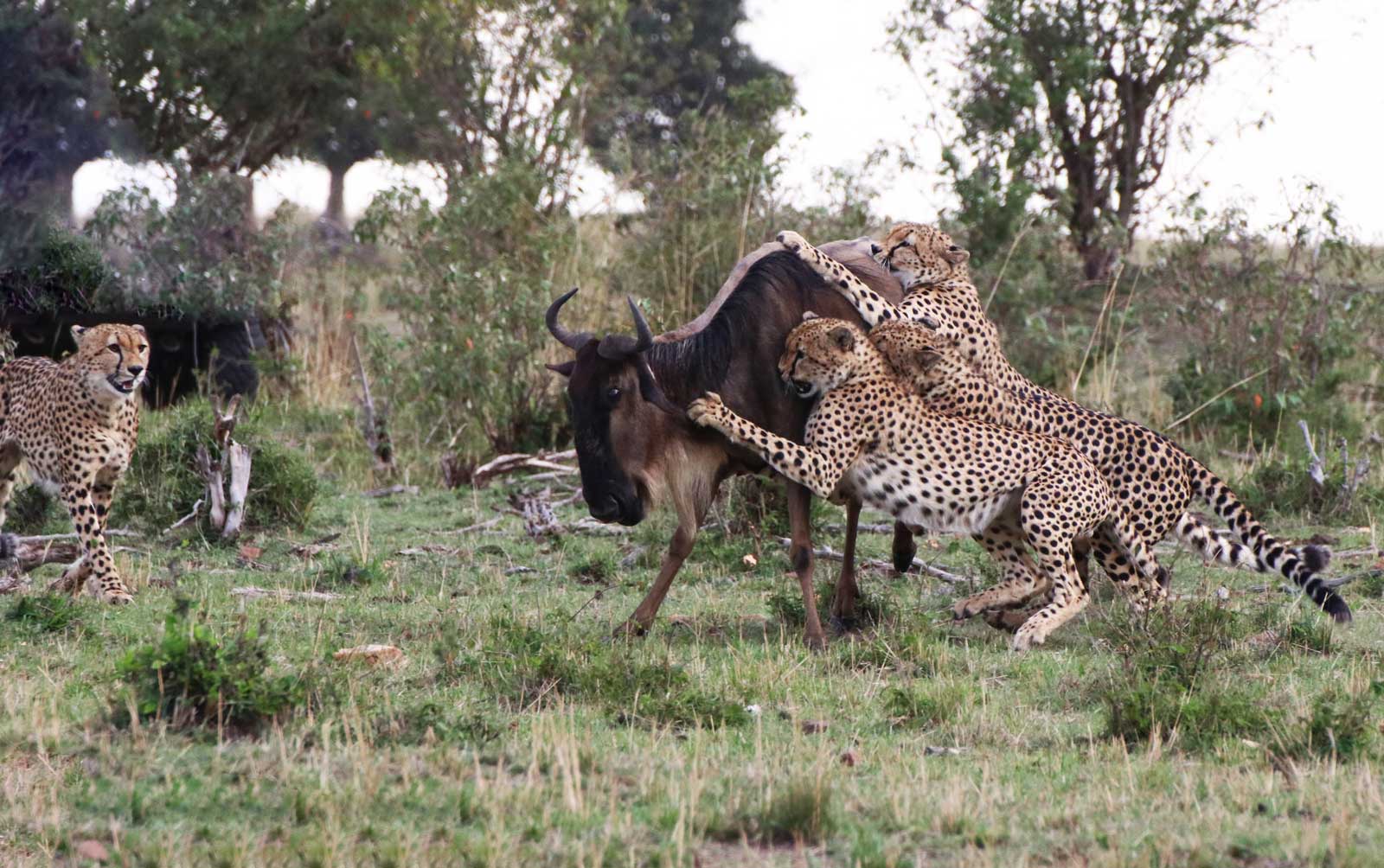 It is rare to see one cheetah, never mind five, but when our recent guest, Nik Simpson, travelled to the Masai Mara recently, he was that guy with the greatest safari stories! He bore witness to five cheetah brothers taking down an adult wildebeest/gnu, which is incredibly fortunate, especially when we consider that during this epic East Africa journey arranged by our consultant, Michelle, he also watched two big wildebeest crossings at the Talek River, saw 6 separate kills, including another cheetah kill, 2 leopard kills, and 2 lion kills. All this in a 10-night safari! We will feature some of Nik’s other fantastic sightings in future blogs, but for the mean time, enjoy these raw and magnificent captures of a 5-strong cheetah coalition in the Masai Mara thriving during the wildebeest migration…

1. Cheetahs are the world’s fastest land animals. They use their incredible speed to hunt, bursting into sprints reaching 110km/h!

2. Female cheetahs live solitary lives after breaking away from their birth families after adolescence, while male cheetahs in a family stick together and form a coalition after they leave their mother. The five cheetahs in this sighting are brothers, which is the norm. Females give birth to a litter of cubs and rear their young on their own until they have matured and are ready to leave their mother’s side (at about 2 years old).

3. It is difficult to tell if a cheetah is pregnant because they have the ability to keep their growing bellies hidden using a muscle that tucks their womb up underneath the rib cage, ensuring they can be fast and agile in order to hunt and eat right up until the last days of pregnancy, which is about 90 days.

4. In the early 1900s, cheetahs used to roam all over Africa, numbering an estimated 100 000 individuals. Today, cheetahs are the most endangered big cat in the world, with only an estimated 9 000 – 12 000 wild individuals alive today.

5. Cheetahs hunt during the day, which means they don’t compete with lions and leopards, which are nocturnal hunters. This cat uses speed and not strength to kill, so would not stand a chance if they were in competition with bigger predators. They thrive in open savannah where they can use their speed to land prey, which is why the Masai Mara is such a good home for them!