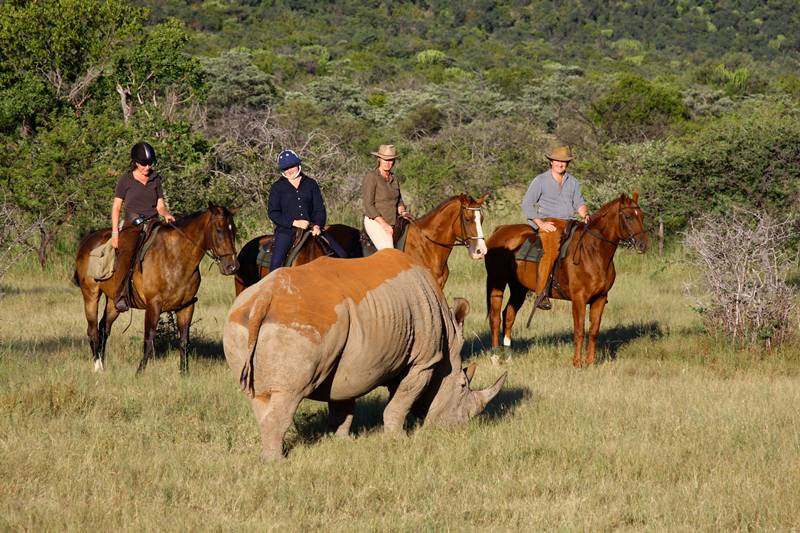 An annual game census takes place at Ant’s Nest and Ant’s Hill in the Waterberg. Visitors are welcome but will need to get on horseback to help with the count!

Here is a wonderful report posted by Hillary Gaertner of The Ant Collection on the Africa Geographic Blog.  You can also read all about What a Game Census is!

For those who are hooked on Africa, there comes a time when you want a totally different safari experience. Ant Collection’s annual game census safari is just that! This is a time in the bush when wildlife conservation prevails and guests have the opportunity to be part of it for an entire week. From game counting and darting, to capturing and relocating wildlife, the activities all have a unique purpose: to keep the private reserve and its animal residents thriving.

The reserve is home to several leaf-eating grazers and it’s important to have an accurate count of them so as to not over-utilise the environment, which has the potential to cause permanent damage of the vegetation.

All of this good, hard work is done on horseback which is quite a unique and intriguing tactic because game censuses are traditionally done by helicopter. However, Ant’s capitalises on what they do best and performs the operation on horseback for several reasons. Firstly, it remains more accurate and less expensive than a helicopter and secondly, it causes much less disturbance to the surrounding wildlife.

The hard work has its pay offs though because the active days in the saddle are accompanied by luxury accommodation and meals, around which both new and returning guests from all over the world can bond over horses and the African bush. It’s also a week that requires focus and perseverance. Lodge owner, Ant Baber, puts these incredible game census tasks into perspective, “It is always very tricky darting and capturing wild animals, and having to coordinate over 40 riders spread out in very thick bush. This year went incredibly smoothly though and every one worked as a team with zero injuries to either man or beast. The horses sensed the excitement of each moment and, despite the long hours in the saddle (sometimes up to five hours at a time), they were always willing and responsive.”

So many variables are at play when the vet darts the animal from horseback in thick bush. The drugs used take up to six minutes for full effect, and in this short time the animal can cover a large distance at a high speed. The sable captures were performed in order to reintroduce five roan antelope to the reserve. Roan antelope had always occurred here naturally, however with the cattle farming era, the beautiful animals were either shot or moved out due to the competition for grazing. In next year’s game census we will introduce new sable bulls to our herd.

Le Roux, one of our guides and expert horseman, had the task of keeping up with our sable bull, and it was a sight to behold watching him lying flat on the back of his fiery, former racehorse called Zi.

Although we positioned our riders in a huge circle around the animal, there was always a chance that he could sneak out. However, all went well and Le Roux was with the sable as it slowed down to a standstill. It was then a case of everyone helping to carry him onto a stretcher to the trailer that would transport him. The two buffalo heifers captured are “disease free” buffalo. In order to ensure they keep this status they have to be put in quarantine and receive and pass blood tests for Foot and Mouth disease, Corridor disease, Brucellosis, and Tuberculosis (TB test) before given the go ahead to relocate to a  new reserve. The purpose of the capture and relocation is to keep the number of buffalo at a sustainable number while the income generated goes towards the considerable cost of employing armed guards to protect our rhino.

Forty riders encircled a herd of 50 buffalo whilst the vet tried to locate the right heifer to be darted. As always the buffalo sought refuge in the dense thorn scrub, and it took a while to get the perfect shot. As the dart hit, the buffalo stampeded away. Riding hard in the cloud of dust, we were able to spot the heifer with the bright orange dart sticking out of her shiny rump. Relieved, we quickly raced to help load the heavy buffalo onto a stretcher. The dust, sweat and excitement of the chase forged a great camaraderie and sense of purpose among participants. The two giraffe captured, a bull and a cow, where mature animals that were sold to another reserve to introduce new genetics into their giraffe population. They needed animals from our area as they are adapted to the particular vegetation in this area. We have to monitor the number of browsers on the reserve and the number of animals who eat both grass and leaves. The trees’ natural defence mechanism in protecting itself is to chemically change the amount of tannin in the leaves. At a certain level of tannin the animals cannot digest the leaves and in extreme conditions will die with a full stomach. You could compare it to a sheep farmer who has sheep in a paddock. No matter how big a paddock is, at some stage, because the animals are breeding at a certain pint, the resource/feed will run out.

The giraffe capture takes complete focus as it needs to be very well coordinated. Just imagine the great teamwork and physical effort required to safely move such huge animals onto a transporter. Using horses instead of a helicopter creates a calm environment in which the other game in the area are hardly disturbed. It was incredible to see a whole herd of giraffe watching the process. The darting of two mature giraffe went like clockwork and everyone was involved in some way or another. “A game census safari or a safari with a purpose.” Whatever you’d like to call it, it’s never too early to start thinking about what next year’s special event holds. Contact us to be part of an adventure for a cause in 2016.