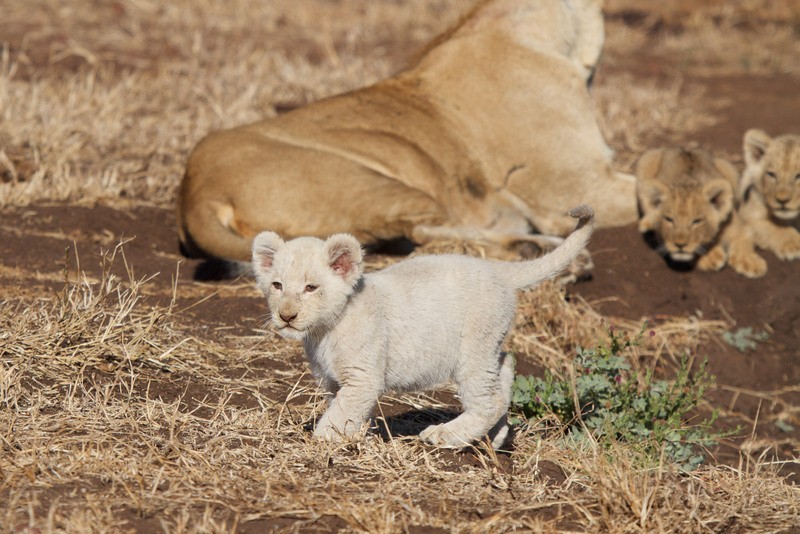 The white lion gene, as rare as it is, has cropped up in the form of a white lion cub born in the Singita Concession of the Kruger National Park.

Its tawny mother and 2 tawny siblings all looked in perfect happiness and health, basking in the morning sunlight in their chosen spot near the Mozambican border. The early life of any newborn lion is dangerous, and their mothers keep them hidden for the first 6 weeks of their lives, just to help protect them and build their strength before introducing them to the pride. This lioness looked very relaxed and was lying out in the open with her 3 perfect cubs who looked curious, but stayed close.

The Timbavati Reserve in the Greater Kruger is known as the indigenous ground for wild white lions and there have been white lions born into tawny prides there for many years. Late last year, the Ross Pride in the neighbouring Klaserie Reserve bore a white cub, however, as lion lives go, it is assumed that the cub did not survive.

This sighting is an example of the movement of lions and the dispersal of prides, which means the spread of the white lion gene. The Ross Pride of lions, which carries the white gene, has been a strong and dominating pride in the Klaserie for a number of years, but recently a coalition of 3 big males known as The Trilogy has split the pride. The previous dominant males have left the territory and all but 2 of the females have moved off. At some point these lions will settle and breed again, if they survive, and who knows where a tiny white lion cub could pop up!