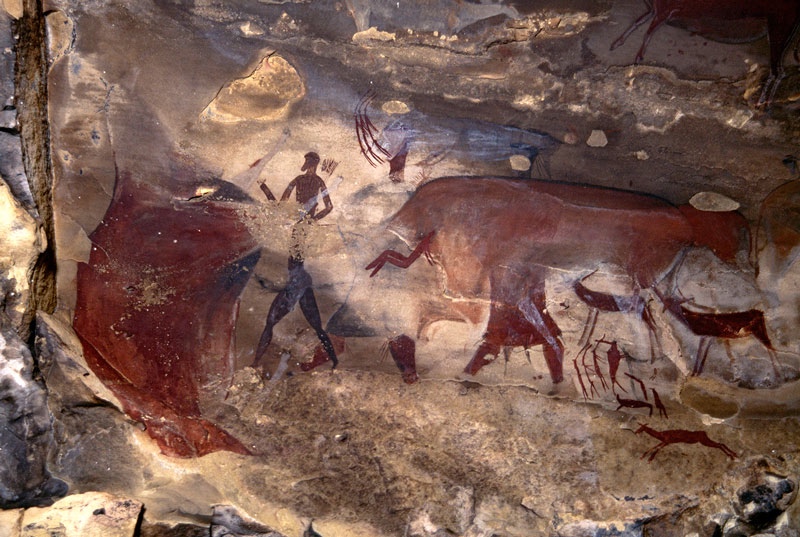 The best places to view rock art in South Africa are in the Drakensberg mountains on the border of KwaZulu Natal and Lesotho, in the Cape Cederberg area, and in the Karoo. There are places scattered across the country that are renowned for either paintings or engravings left by the San (Bushman) or the Khoekhoen (Herders), and if you’re travelling in more remote parts of South Africa and have a cultural interest in the country, it would be worth your while to check out the details for some of these sites.

In this article, we’re highlighting three rock art sites that are more or less on the popular tourist route, making them easy to access if you’re hitting the safari destinations of the Kruger National Park and Hluhluwe-iMfolozi, or heading up on a cross-border road trip to Botswana or Zimbabwe.

South Africa has a large amount of paintings and engravings, some of which date back thousands of years, but most significant are the etchings in ochre that were discovered in a limestone cave on the southern Cape coast. These discoveries in Blombos Cave are known to be some of the oldest prehistoric art in the world, dating back well over 70 000 years!

Bushman’s Kloof is in custody of an incredible piece of heritage; over 130 different rock art sites have been identified here, some of which have been dated to as far back as 10 000 years. The reserve is a Grade 1 South African National Heritage Site and fortunately for us ancient art seekers, we can go and see these protected and conserved paintings that were made by staining rocks with oxide pigments. The paintings here depict elements of the Bushman culture, lifestyle, and spiritual beliefs that were all a part of their lives in these ancestral mountains.

Bushman’s Kloof is a destination in itself, and viewing the sites is a privilege of the guests who stay at the lodge. It isn’t open to the public and is protected under the responsibility of the reserve, so to see the ancient sites, guests of the luxury lodge will go on a guided excursion into the mountains and benefit from an interpretive guide. Afterwards, you’ll sit down to a delicious breakfast in the bush and hear more stories about the fascinating, ancient surroundings.

Ukhahlamba-Drakensberg National Park is the country’s capital of Stone Age art. It has some of the most beautiful rock paintings in the world on its ancient, stone walls and rocky overhangs. There are in the region of 520 rock shelters in the park, which are adorned with 30 000 images painted about 4 000 years ago by the San using various pigments, such as plant sap, animal blood, and natural ochre. This wildly impressive, spiritual anchor of South Africa has been a declared UNESCO World Heritage Site for almost 20 years, and it isn’t protected for the rock art alone. Ukhahlamba is a vast area of 240 000 hectares, defined by rivers, wetlands, mountainous grandeur, indigenous forests, rolling grasslands, and jagged valleys and ridges. Imagine the diversity of species found in an area so multifaceted.

There are a number of accessible sites in the park and a handful of guided day excursions, which are excellent for getting a bit of hiking in in this pristine environment and seeing more than just the art itself. Knowledgable guides interpret the paintings and point out various other wildlife and birds, so the walks are overall a fantastic experience. At Royal Natal National Park within the Ukhahlamba-Drakensberg Heritage Site, guided outings to the Sigubudu Bushmen paintings take place every day between 9:00 and 16:00 and each excursion takes approximately one hour (20 minutes walk either way and 20 minutes spent at the site).

Alternatively, one can visit Didima Resort’s San Rock Art Centre, which has a display hall where visitors learn about the uKhahlamba San people and their lives in the area. There is also an auditorium where visitors can watch a screening of the audio-visual presentation. The Rock Art Centre is open between 08:00 – 16:00 daily.

Right on the northern border of South Africa in Limpopo Province is Mapungubwe, which is the famous home of the golden rhino. It is a location celebrated for its cultural history and preserved heritage and there is a fascinating and beautifully designed interpretation centre showcasing some of the archeological finds in the park over the years. Also well worth visiting here is the Kaoxa Rock Art Shelter, which was named after the Kalahari San hunter-gather god, Lord of the Animals. This renowned place is not only home to San art, but also art of the Khoekhoen herder people who painted with their fingers rather than tools, and interestingly markings made by the Early Iron Age farmers. Some of the San paintings here are at least 2 000 years old and there are over 250 pieces depicting people and animals, including rare images of locusts, mongooses, a springhare, and a hippopotamus!

Viewing ancient art (in Africa or elsewhere) gives us the incredible opportunity to stop and imagine a very different life. One where communication did not extend much beyond spoken language to those in one’s immediate vicinity, and maybe smoke signals to send a message to someone from afar. Art, in the form of paintings and etchings in natural substrate like rock, was used to record and communicate messages, which are now a part of human history.