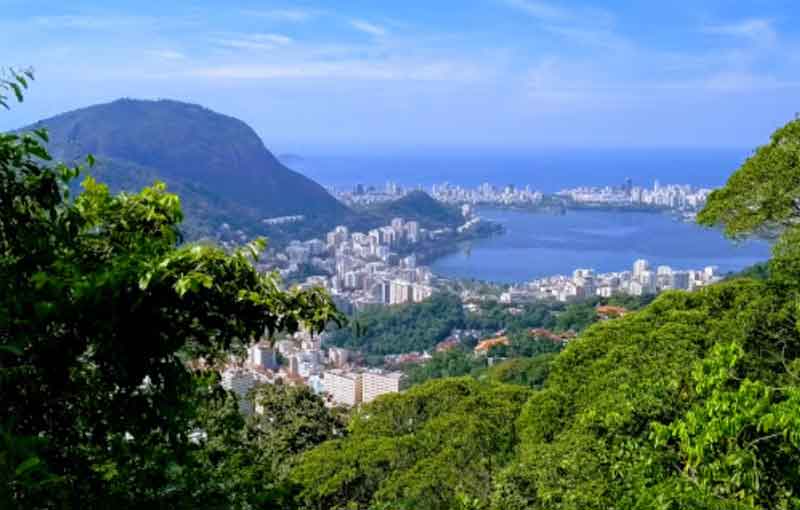 Established in 1961, the sprawling Tijuca National Park is – arguably – the world’s largest urban forest. Some might argue that Johannesburg in South Africa is home to the world’s largest man-made wooded area, but it’s actually Rio de Janeiro that takes the title. Granted, Johannesburg is one of the largest forests, but we’re handing the baton to Brazil. The Tijuca Forest carpets 3,953 hectares of reclaimed land that was previously cleared for coal and coffee production. Tijuca is now home to a mosaic of trails, cascading waterfalls, wildlife, viewpoints and famous landmarks (most notably the art deco Christ the Redeemer statue).

History of the Tijuca National Park

The initial reforestation project on the outskirts of the city actually started in 1861, when water sources became scarce. It was quickly realised that the production of coal and coffee was depleting the city’s water supply. Industry cleared and wiped out the natural rainforest, and the city suffered to consequences. And so the reforestation process began with the replanting of over 100, 000 trees after the arduous task of expropriating land in the interest of the public. The task was long and drawn-out, but much needed. In 1961 the urban rainforest was declared a national park, and has since become a much-visited destination in Rio de Janeiro.

This urban rainforest inside city limits is an absolute gem to explore, and there are plenty of activities and monuments to visit within the park. The Tijuca Peak and Corcovado mountain where  Christ Redeemer statue is located are two major attractions which should not be missed. Visitors would need, on average, 2 days to explore the park. The park is open from 8am to 18:00, so we recommend you set aside a couple of days for exploration purposes – just bear in mind that summer is the rainy season, so you’ll need to check the weather prior to planning your activities. During the peak season and carnival time it’s recommended that you get an early start to your sightseeing.

Things to do in Tijuca National Park

There are many different ways to explore the Tijuca National Park, with varying routes. Its many roads allow visiting on foot, bicycle, car and even busses.

Getting around Tijuca National Park

The main entrance to the park is located at Afonso Viseu square, where visitors can access the Tijuca Forest. The most popular entrance area for the waterfalls, easy trails and picnic areas is Alto da boa vista. This is also where the visitor’s centre is located.

There are a few common treks throughout the park, and roughly 30 waterfalls. Visitors will need to find which entrance serves the circuit they wish to traverse, or their points of interest.

Whatever you do, don’t miss Tijuca National Park !