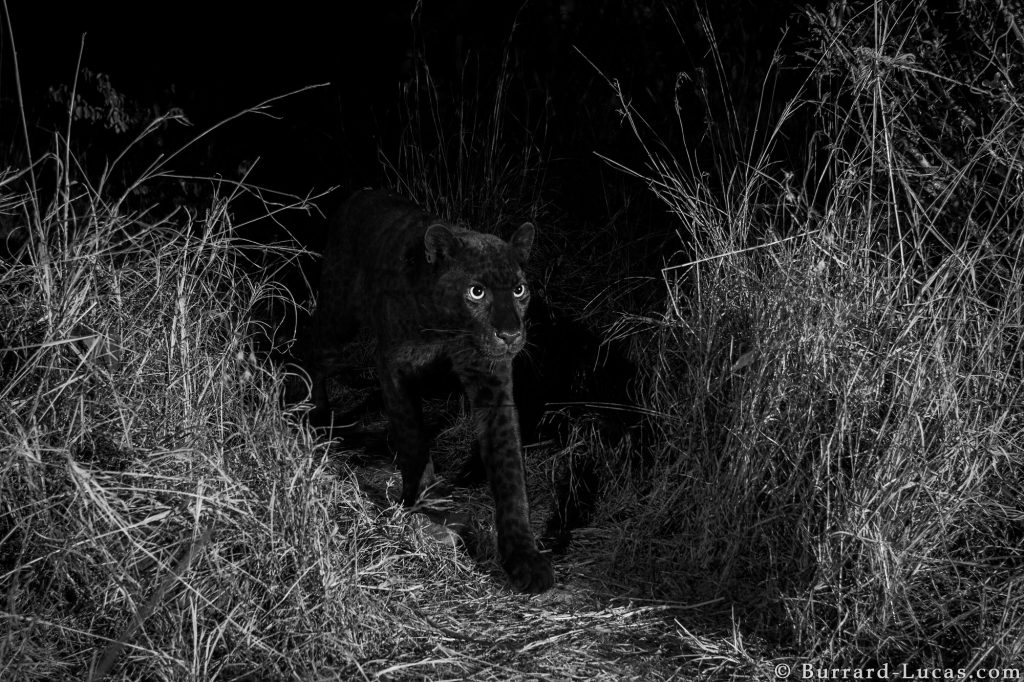 An incredible scientific discovery has finally been captured on camera and revealed to the world: the African black panther photographed in the wild in Kenya’s Laikipia region. British photographer Will Burrard-Lucas used his unique Camtraptions remote camera trap technology to capture the first scientific photographs of this incredibly elusive creature on Laikipia Wilderness Camp’s property, and the result is nothing short of amazing.

While evidence of these black leopards in Africa has been revealed over the years, this imagery is the first scientific documentation of the animal since 1909. This animal has been mere legend, spoken about among those lucky enough to have caught sight of it crossing their path, or as a dark creature moving furtively through the bush. It is tricky enough to find a spotted leopard, never mind being able to photograph the Bagheera of Africa!

Nicholas Pilfold is a biologist living in Kenya, and he and his team have been observing this melanistic leopard since last year and he said that it is unlikely that it is the only one. It wasn’t until Burrard-Lucas arrived with the dream of capturing a high-quality image of this rare cat with his unique equipment that the presence of the African black panther has been revealed to the world.

The cat has been spotted on Kenya’s Loisaba Conservancy at Laikipia Wilderness Camp. Back in 2007, a photograph was seen of a black leopard on Ol Ari Nyiro Conservancy, also in Kenya, but the time difference and young age of the more recent black leopard sighting reveal that it is not the same leopard photographed more than 10 years later. What that means is that this recessive gene is alive and well, and although it is extremely rare, it is not extinct.

Take a look at these mystical, newly released photos of the black leopard of Laikipia below. And get in touch to book your trip to this place of legends!

Where are black leopards found?

Black leopards are found in India in Kabini National Park where they are also extremely rare, however far more Asiatic leopards are melanistic than African leopards

There have been very few sightings in the history of black leopards in Africa and even fewer photographic evidence, which is what makes these photos so special.

Are all panthers black?

Black Panther was originally the term given to black leopards in Asia and black jaguars in South America, but black leopards in Africa are also referred to as black panthers. It is the melanism in the skin pigment that gives these cats the black colour, and only these melanistic cats are referred to as panther. Leopards and jaguars with normal pigmentation are not called panthers. See these images of a rare black wild cat and a black serval also found in Africa. These small cat species are not referred to as black panthers… or baby panthers!