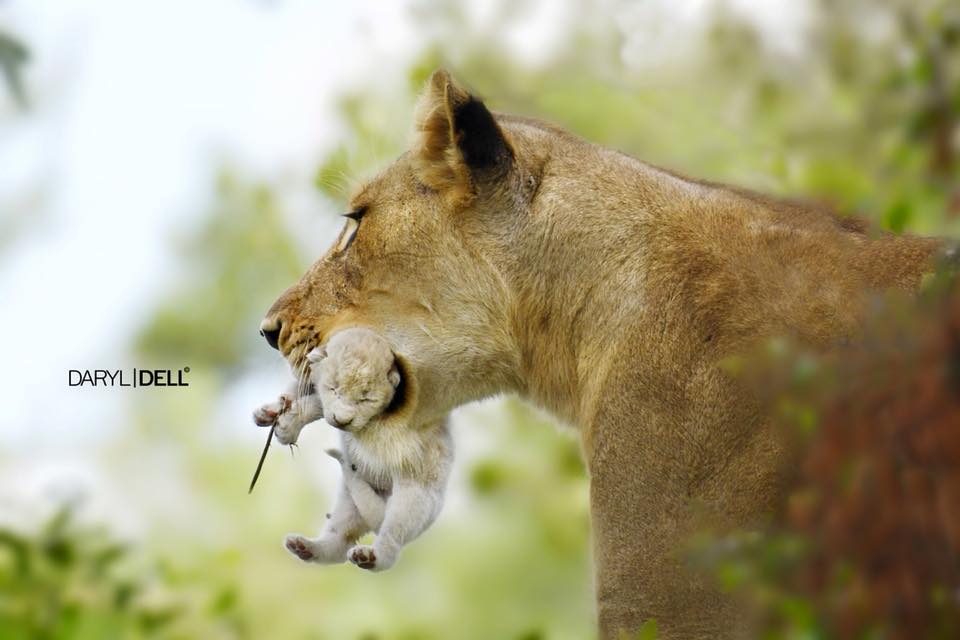 The legend lives on: a white lion cub is reported to have been born in the Timbavati Private Nature Reserve of the Greater Kruger Park. This news broke yesterday (March 13th), and the first images of this incredibly rare lion were posted by private guides, Mike Sutherland and Daryl Dell, who were hosting guests at Ngala Safari Lodge. The cub was born to one of the Birmingham lionesses and potentially fathered by the elder of the Giraffe pride males (this is unconfirmed). There are 4 cubs in the litter, and only one is leucistic, which gives it its enigmatic, white appearance. It is not albino, as is a common misconception.

The white lions of the Timbavati are famous, and particularly the Giraffe pride, which was the resident pride of two female white lions who grew to adulthood and had cubs of their own. Sadly, as is common in the wild, these lionesses saw their end, and none of the white cubs which were born to them survived infancy. Since the last white lioness died last year, this cub is the first and only white cub known in the region, and at only 2 weeks old, it has no idea that it is different or special any way.

The news was released to the public yesterday, but guides at Ngala Private Game Reserve discovered the tiny cub over a week ago when it was only about 5 days old. One white and three tawny cubs squirmed around blindly in their den site, which is unknown and is remaining undisturbed. The images captured by guides, Daryl Dell and Mike Sutherland, were taken from an entirely unobtrusive position, and their delivery to the public has been met with much appreciation and awe. Here is what these guys had to say about this once-in-a-lifetime sighting, and of course, here are the photos…

“When you spend 17 hours of the day on Safari and have been guiding for more than 15 years you will be rewarded with a lioness carrying a 4-day old white lion cub. A once in a lifetime moment, a moment that you will never forget and always cherish. As if this wasn’t enough at first we saw her carry one Cub, then this white one and then a third, I would have been blown away with the first cub!” – Daryl Dell, Painted Wolf Images.

“A moment that I will never forget, was on a recent safari to andBeyond Travel‘s Ngala Safari Lodge. We were fortunate enough to witness this baby white lion cub, the only one know in the wild currently. When we viewed it last week, we assumed it was roughly 5 days old, and today it was confirmed that it is still alive and well. Extreme care has been taken whilst viewing this cub, and its siblings, and at this current time, the den site is unknown. We viewed the cub, at its den, with its mother present, without off-roading or interfering. The den was located on the banks of the Timbavati River, metres off the road. A fortunate time to have visited, and thankful to have had the privilege to witness this moment.” – Mike Sutherland, Ngala Safari Lodge.