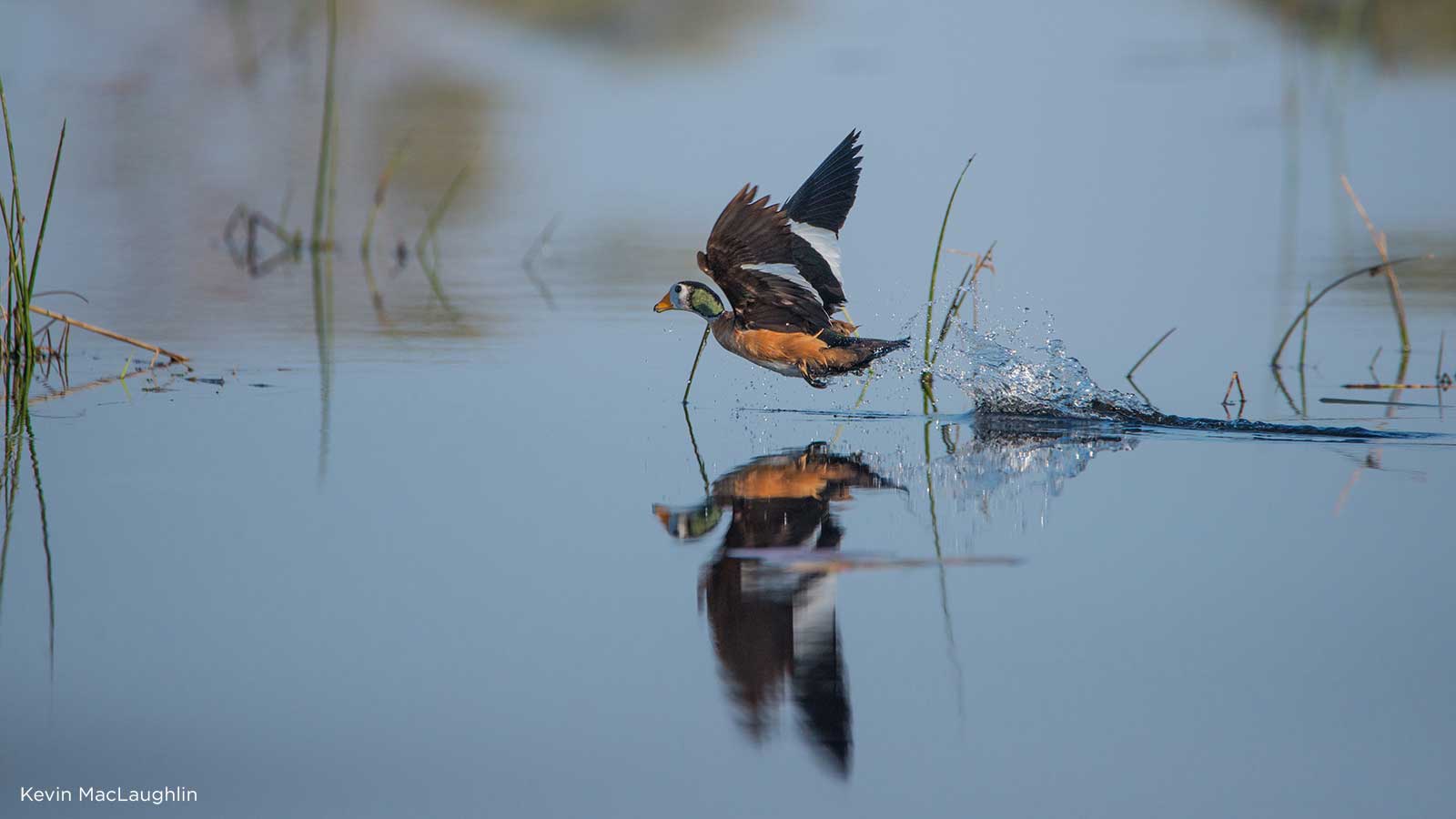 It is popularly believed that the Selinda Spillway is one of the most alluring and untamed regions of Botswana; a hideaway in the country’s northern marshland territories. This exquisite wildlife conservancy lies between the Okavango Delta panhandle in the west and the Linyanti Swamps in the east, along the floodplains of the Selinda Spillway. This watercourse ebbs and flows with the presence of floodwaters each year, offering sublime avenues for African canoe adventures, riverside bush trails, mekoro canals, and exceptional wildlife viewing. A highlight of the area has to be the presence of the endangered cheetah and wild dog, roan and sable antelope, and free-roaming elephant and buffalo populations. Visitors to Selinda had better have an appetite for birding too, as there is, without a doubt, a feast to be had! Being the shameless Twitchers we are, we’ve put together a birding blog based on a recent trip to Motswiri Camp, which showcased some of our favourite and most photogenic feathered species. Here we go…

For starters, this diminutive waterfowl is not a goose at all, despite what its name so clearly suggests. The African pygmy goose is, in fact, a duck – just like numerous other mislabeled ducks, such as the Egyptian goose. This colourful, beautiful bird is one of the smallest of the water birds and it is a total special in regions like the Okavango Delta, and areas with similar shallow waters with lots of green coverage; so the Selinda Spillway fits perfectly into this perching duck’s chosen habitat.

The African pygmy geese are timid birds, and it is likely that they will take off just as you get the camera focused and ready to shoot. On the bright side (if you’re a good enough photographer), you’ll capture some fantastic movement shots as the little ducks glide along the water and flap their wings vigorously in an attempt to get away. They are considered to breed as monogamous pairs, and are often seen in groups of 2 or 4, but sometimes you might spot a larger flock, which will most likely be of an even number.

This brilliant-blue little kingfisher is certainly one of the most striking and photogenic of the riverside birds to spot in Selinda. Its iridescent plumage is similar to that of the malachite kingfisher (pictured below, middle, for comparison) – its more commonly spotted cousin – but the dark beak is a dead giveaway. Once you’ve got the beak colour out the way, its white collar becomes an obvious feature indicating its identity. It wraps halfway around its neck, collaring the back of the neck, and then brushing a white patch on the bird’s chin.

This spectacular little kingfisher is is found at the water’s edge, as it feeds almost exclusively on fish, unlike its brown-hooded and woodland relatives, which feed mostly on insects despite their ‘fishy’ names. When you’re cruising on a mokoro or a canoe, take the the opportunity your stealthy mode of transportation offers, and keep an eye out for this electric blue little bird.

The most prolific of the water kingfishers, this black and white beauty is a skilled fisherman, and offers some of the best photo opportunities and most entertaining birdwatching of the lot in Selinda. This kingfisher has a wide distribution, and is a common resident wherever there is a good water supply. As can be seen in these fantastic images, the bird’s fishing technique is a serious performance: it is one of the few birds with the ability to hover in mid-air.

The pied kingfisher’s wings beat furiously fast as it hovers in one place, sending its piercing vision into the water below, expertly eyeing out potential prey, and finally dives with precision, beak first. This kingfisher might not have glittering colours glinting in the sunlight, but it certainly offers the most incredible behavioural display.

This is a short-necked heron with a fantastically streaky, buff body, which transforms when it bursts into flight and reveals its bright, white wings. The squacco heron is a common sight in the northern Botswana water systems, rivers, and swamplands, and offers beautiful silhouettes for photography when the sun shines through its pearly white wings and creates a somewhat angelic appearance.

An outstanding yellow eye is another of its recognisable features, and you will often see it taking off suddenly from between the tall grass strands on the banks of a river. It is a migrant bird and flocks to Africa for the winter, to enjoy the warm humidity of summer, African wetlands.

A common feature of the Sub-Saharan wetland habitat, but certainly one of the most fascinating; the African jacana is striking to look at and possesses some interesting breeding habits. Rich, chestnut plumage and a brilliant plate of pale blue at the top of its beak make it instantly recognisable, but perhaps its most unique feature is less obvious unless in flight. The African jacana’s feet are quite enormous with long toes, which suit its preferred habitat very well. These birds are most often seen walking atop floating lilypads and other vegetation in shallow waters, and their impressive feet allow them to move with ease.

Our favourite fact about the African jacana relates to its breeding behaviour: the male jacana is responsible for rearing the chicks, while the female bird will mate with numerous eligible males before leaving them in charge of incubating her eggs and raising the chicks. The male birds are able to pick up and carry their little chick under their wings once they have hatched. Of course these fluffy youngsters are blessed with the adorably oversized feet the African jacana is known for.

An iconic bird of prey, and famous ambassador animal for Fish Eagle whiskey, the African fish eagle is our final feature on this birding list, and if its enchanting call is anything to go by, it is a worthy conclusion to a fantastic collection. If you’ve ever been on safari near an African water source, you’re likely to have heard the “wheeeeooo-woo-woo” of the fish eagle echoing across the water.

This chestnut and white raptor is an expert fisherman, having perfected the swoop-and-grab action, much anticipated by waiting photographers. If you catch one of these birding icons perched on an open branch, be patient enough to wait for it to call, and observe the enthusiastic neck movements that pair perfectly with the sound. This is an African icon and special feature at Selinda, impossible to ignore.