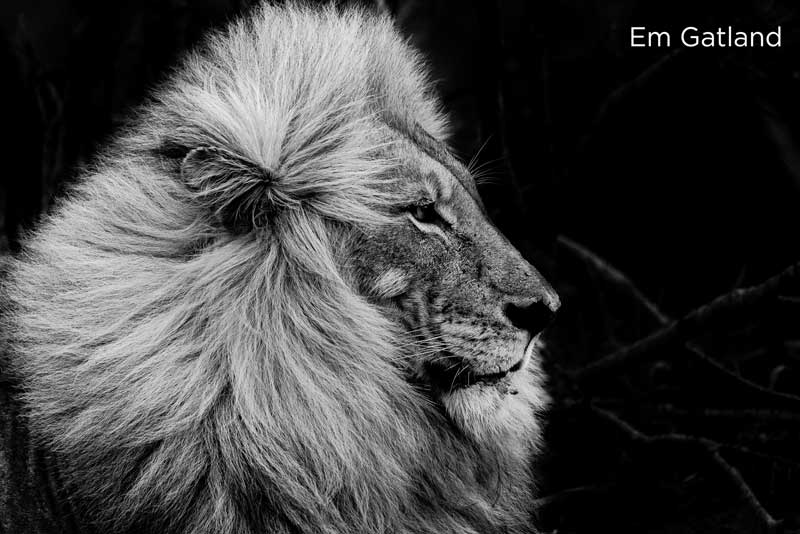 Up and coming wildlife photographer Em Gatland knows a thing or two about the safari lifestyle. Having spent time traversing the arid thickets of Kruger and the weaving waterways of the Okavango Delta, she’s become an expert in capturing exceptional wildlife moments through her lens. She’s camped, stayed in luxury lodges and spent many evenings under the black canvas speckled with stars in the hopes of capturing the most mesmerising moment on camera.

Her style is unique and focusses heavily on the angles, emotion and stark reality of the wild. Today we’ve decided to celebrate her black and white wildlife images.

With such an extensive portfolio, it was tough to select our favourites masterpieces delivered to us via her lens. In the meantime, here are just a few of the animals she has photographed and a bit of advice on what to look out for while photographing wildlife.

1. Elephants : Em has mentioned that elephants are one of her favourite subjects to photograph. With their wrinkled skin and many folds, there are plenty of grooves and shadows to photograph. Then of course, their rugged tusks and swaying trunks make for great. Those ears that look like antennae can really highlight the size of the pachyderm.

When you spot an elephant herd, look closely. You’ll probably find plenty of calves to photograph. This is because an elephant is raised in a matriarchal herd. Female elephants roam in herds and each cow helps to raise the younger calves. Elephant bulls form loose associations with other bachelors and only join a herd when its time to breed.

2. Leopards : With their furry mottled coat with stark rosette patterns, there’s plenty of opportunity to photograph a range of textures and colours. Leopards are notoriously elusive, so you automatically get credit just by managing to photograph one. Leopards enjoy the vantage point from tall trees, so if you spot one high above there’s ample opportunity to get some great angles and perspective.

Leopards are mainly on the move during the nocturnal time of day. Make sure you have a great camera that takes good night shots. During the day, these cats conserve their energy by sleeping in trees or on top of termite mounds. When a leopard makes a kill, it will drag the prey up the tree for safekeeping. They have been known to feast on their prey for a couple of days – scavengers can’t access the kill when it’s stashed in a tree.

3. Lions : Lions spend up to 20 hours a day sleeping in open areas or under the thickets in the shade. It’s quite easy to take close-up photos of lions, even if you don’t have a great lens. The game viewer can get up close. When lions are sleeping they may roll over onto their backs, which will expose their paws and bellies. This could allow for some rather heart-warming photos of “cute” paws and fluffy cats.

Lions, much like leopards, patrol their turf at night and conduct kills during the dark hours. You’ll need a good camera to capture the night time magic.

Advice for wildlife photography : The next time you’re on a photographic safari, try to emulate a few of the angles that Em has managed to execute with her photography. Look for others miss and focus on the small things – it adds creativity, depth and dimension to your photos.