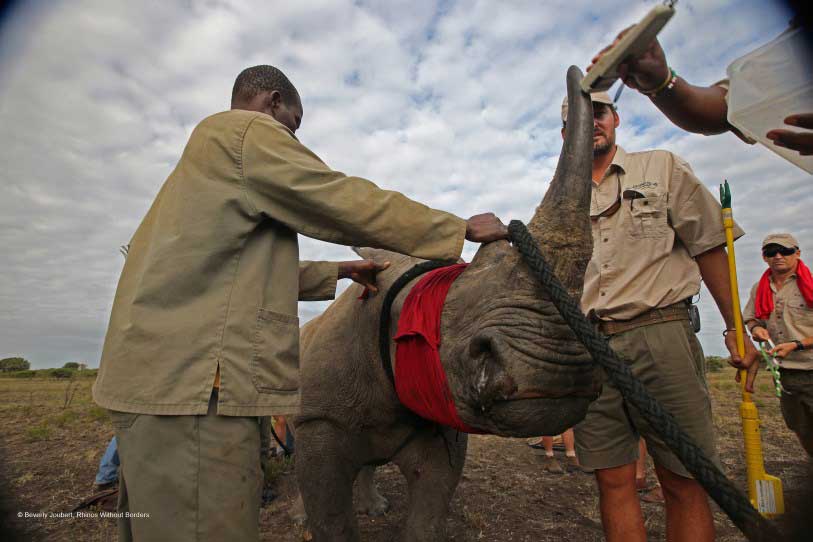 The protective boundaries of Botswana have been opened to receiving one of the most vulnerable mammals on the planet: the Southern white rhino. Desperation to save a species has led to the innovation, collaboration, and execution of one of the most significant animal translocation projects of today. Pioneers and leaders in conservation, Great Plains Foundation, teamed up with world leaders in luxury travel, &Beyond, to bring us Rhinos Without Borders. Upon completion, the project will have translocated 100 rhinos from the poaching war zone that has become of South Africa, to an undisclosed location in the safe arms of Botswana.

In December 2014, the project was initiated, and a year later the team reported that two batches of rhino had been successfully rehomed in the wilderness of Botswana. At USD 45 000 translocation cost per rhino, this is an expensive operation, and it is anticipated that the project will run for a couple of years on public donations and the financial involvement of the private sector. After 1,5 years RWB is already a quarter of the way through their 100-rhino-target. Excellent news.

In the world of safari and the field of African travel, we are all too aware of the heartbreaking poaching crisis that consumes South Africa’s wildlife. The Kruger National Park is the country’s most visited, most revered, most biodiverse, oldest, and largest wildlife park. It is the last remaining stronghold of the Southern white rhino, and tragically, it is perhaps the unsafest place for rhinos to be. Last year, South Africa lost over 1700 rhino to poaching – 500 rhinos more than the year before. It can be said that the historical, remarkable, world-renowned Kruger National Park is no longer safe for rhinos to live.

Botswana’s attitude to conservation, its no-tolerance stance on poaching, and iron-clad laws that protect wildlife make it one of the safest countries for rhinos to live, and every other wild animal inhabitant. Rhinos Without Borders, under the expert guidance of Dereck and Beverly Joubert – CEOs of Great Plains Conservation, wildlife filmmakers, and ambassadors of conservation in Botswana – aims to create a new breeding population of rhino in Botswana. Here, in the safe embrace of the country’s pristine wild reserves, a safe, peaceful, wild population of rhinos will flourish, protected by the Botswana Defence Force.