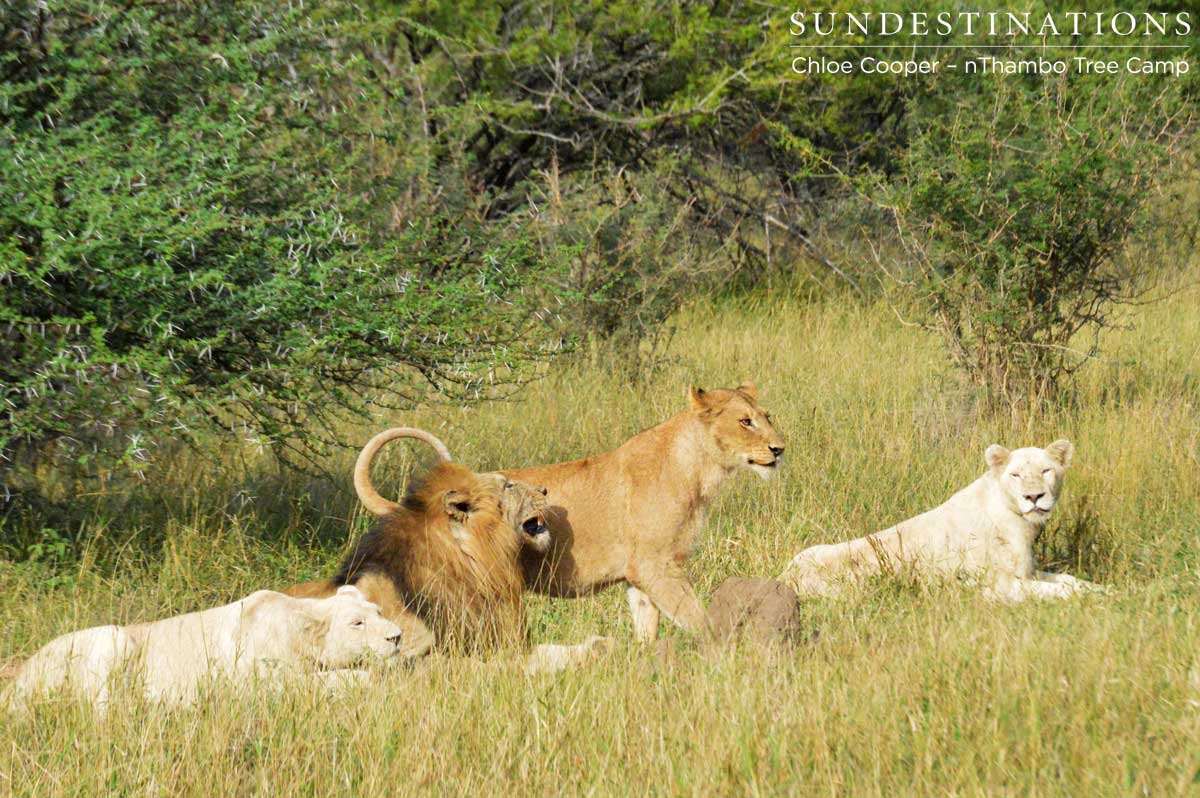 What an epic sighting in Kruger: White lioness and a Trilogy Male mating!

Guests and the media team of Chloe Cooper, Carolynne Higgins and Kevin MacLaughlin were in the right place at the right time to witness this amazing wildlife sighting of one of the Trilogy males mating with not one, but three lionesses, two of which happened to be the rare white lions! Here is an accounting of the action from Chloe and Carolynne:

When game drive takes place in the Klaserie Private Nature Reserve, you know you’re in for a treat when it comes to lion sightings. Africa on Foot and nThambo Tree Camp have reported sightings of the legendary Ross Pride, the Trilogy Lion coalition, and Ross breakaway lionesses all within the last week or 2.

Today we saw white lions. Two of them. The 2 white lionesses of the Giraffe Pride, famous in the Klaserie and Timbavati nature reserves. On the main tar road that divides the 2 unfenced reserves, a sighting of one white lioness and one tawny lioness was called in on the radio. nThambo’s vehicle responded, and to guests’ utter delight, there they were. The snowy fur of the white lioness, standing out from her beige and green environment, and her blue eyes glistened like small pools of ice. Her tawny sister was harder to spot with her camouflaged fur, but there they were, behind the long grass, about 30m into the bush.

We could not have imagined what happened next.

The tawny lioness rose and walked off down the long, open road, contact-calling quietly, pausing every so often. Eventually the white lioness followed and we watched in awe as one of the rarest lions in the world stepped out of the vegetation and confidently walked along a dam wall, in full vision of nThambo’s enthralled guests. After a couple of exceptional minutes, the radio grabbed our attention once again.

A little further up the road and in an open clearing, one very familiar male lion and a SECOND white lioness were seen mating. Reluctantly leaving the first white lioness in search of something even more spectacular, we drove the last stretch along the road until a great, fiery mane popped out of the grass, accompanied by a smaller, snowy head. Instantly, the male was recognised as one of the Trilogy males, and the lioness was identified as the other white lioness of the Giraffe Pride.

If you think this is where it ends, think again.

A few bouts of mating take place between the 2 lovers, snarling and growling at each other in the heat of the moment, then, just as they are about to doze off, the urgent calls of the other 2 lionesses snatched the male’s attention. There we sat and watched as both the tawny lioness and the first white lioness bounded up to the mating pair and greeted one another in a flurry of affectionate nudging. This lucky Trilogy lion was surrounded by ladies, and we watched as they excitedly followed each other into a clearing right next to the road before flopping down to rest.

Once again, we were to be thrilled with surprise…

A certain amount of flirting commenced only moments later when the tawny lioness flicked her tail temptingly under the male lions nose, reversing into him suggestively and rolling over right under his chin. Sure as rain, he was won over and began to mate with this lioness as her 2 white companions lay on either side. It became evident that this Trilogy male was courting all three of the lionesses when after a short break, he rose to the challenge yet again; this time, to tend to another white lioness.

It was something not short of magical. To have glimpsed that first hint of white fur through the bushes, then to have watched one lioness’ majestic form walk tall on the dam wall; and finally, to be bowled over by the lion-love that was shared between 3 Giraffe Pride lionesses and 1 lucky Trilogy male.

Guests at nThambo Tree Camp: Tick ‘wild white lions’ off your safari bucket list. Maybe make a note there that they were mating…you’ve just witnessed the highly possible conception of some of the rarest lion cubs in the world.