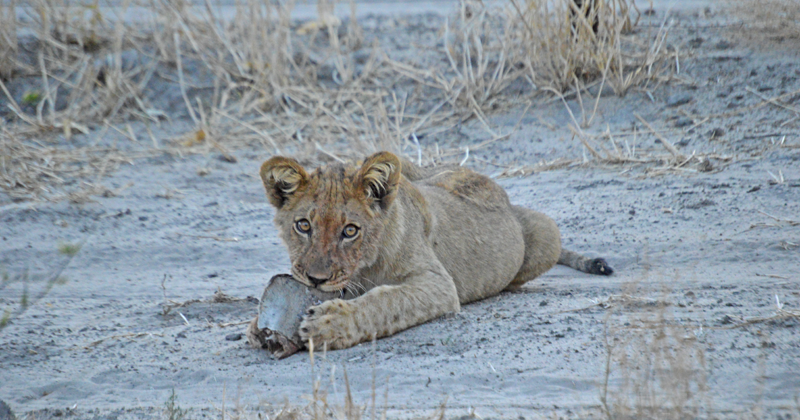 For the last few weeks the Sun Destinations team of photographer and film maker Kevin MacLaughlin and blogger Chloe Cooper were exploring the wild and beautiful Botswana. They returned to their respective offices – Kevin to the bush at Africa on Foot, and Chloe to the office in Cape Town, and shared their amazing trip with words and pictures, showing that it really was Baby Season in Botswana! Here is what Chloe had to say, accompanied by amazing pictures taken by Kevin.

On a recent trip to Botswana, we bore witness to some of the first impalas to be born of the season, baby warthogs tearing up the ground in an excitable game of ‘tag’, and some of Africa’s fiercest predators in their cute n fluffy youth. Well, their presence at a bloody kudu kill tainted their innocence slightly, but soon their playful tug-of-war with the kudu’s ear took them right back to cub-hood. Take a look at this week’s Week in Pictures, provided by Sun Destinations’ photographer and filmmaker, Kevin MacLaughlin.

A pride of 6 cubs, 3 lionesses, and 1 dominant male lion was settled just along the main road bordering the Central Kalahari Game Reserve near Haina Kalahari Lodge in Botswana, and resting under a nice, shady tree was the glassy-eyed remains of a kudu bull. Scattered on both sides of the fence line, the pot-bellied lion cubs were in full view of our game viewer, and they were too fat to go anywhere. Two out of the 3 mothers rested on the sand road in front of us, while the black-maned male was secluded under a tree, having eaten his fill. One lioness was feasting greedily on the kudu, as was a pair of determined cubs, while the rest of the family lay uncomfortably with swollen tummies. What an incredible sight and photo opportunity with the setting Kalahari sun!

After flying with Major Blue Air in a stylish 6 seater airplane over the Okavango Delta, we set off on a game drive to Mapula Lodge in a private concession of the northern Delta. On the way to the lodge, a flurry of action turned our attention to a termite mound on the left, and what we saw was a pair of warthog siblings engaging in a chase of one another. Mother warthog grazed around them without batting an eyelid and we managed to drive right up to them and watch them fly along the ground in true child-like fashion before settling down for a rest and allowing us to take a couple of photos.

Camping might have been the most fun out of the trip through Botswana. Removed from the comfort of lodges and placed into the simplicity of the bush, tent-life at Camp Linyanti allowed for some of the most up close encounters with elephants and hippos throughout the whole trip. A shady patch of ground with a fire block, a braai area and a nearby tap made up the basics of the campsite, while the unbeatable location of this Chobe oasis was what made it unforgettable. Only a few steps down the bank in front of our site were the waters of the Linyanti swamp, and elephants moved freely between us and the water as we watched from the comfort of our camping chairs. Just around camp was an unlimited supply of birds, and small mammals that frequented the area. One afternoon a troupe of baboons foraged under ‘our tree’, while a juvenile bateleur perched, poised, on a tree branch.

Returning to South Africa meant returning to Africa on Foot and nThambo Tree Camp where we headed out to see what we had been missing! Sure enough, baby season had hit the Klaserie bush, too, and we spotted numerous young impalas skittishly bolting from sight and hiding behind anything they could. Kevin managed to capture one as it paused to look around at the vehicle. In the next few weeks, many female impalas will be ‘dropping’ their young, and the rounded bellies will even out once more, but we know that such high numbers of easy kills will bring the predators even closer…

Just before departing the Klaserie and heading home to Cape Town, my morning game drive game me something to smile about. A flock of vultures drew closer to the ground just ahead of us and eventually landed on the surrounding trees. A kill! We had just seen a leopard hanging out in a tree before it leapt down and headed into the thick bush, and the presence of vultures made us suspicious. We ventured into the bush and saw an elephant looking nervous. Soon enough our eyes were drawn to the tiny bundle of elephant joy that wobbled at the feet of its mother. This elephant had just been born and could barely walk; its afterbirth was what was attracting the vultures. Its mother began to relax and she threw dust and grass over herself in a satisfied manner, leaving the debris on her head like a crown.