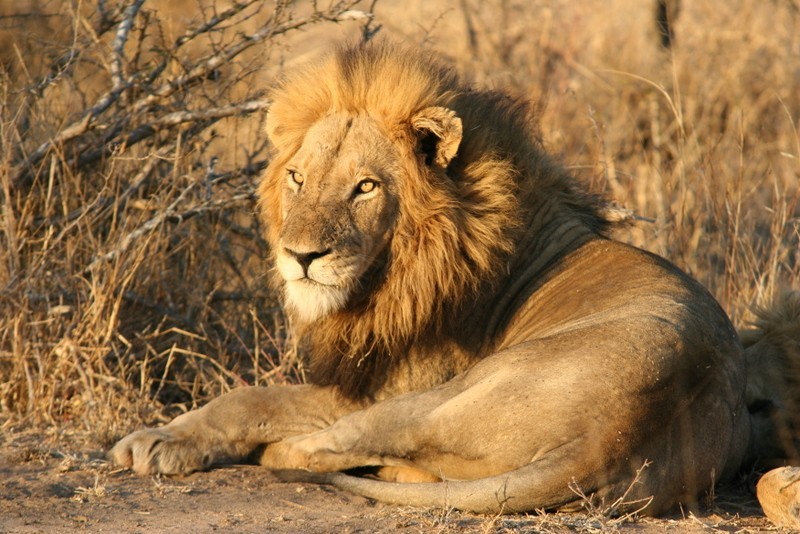 Watching 4 sub-adult male lions gorging themselves on a buffalo carcass is a spectacular sighting in itself, but, as we always emphasise in nature: you can not predict what is going to happen.

These guests were visiting nDzuti Safari Camp deep in the Klaserie Private Nature Reserve of Greater Kruger. Guided by owner Bruce Meeser, the guests were led right to the site where these big males were feeding. Perfect lighting and beautiful specimens made this a safari sighting to remember.

The nDzuti lions are called the River Pride, named for their beautiful territory, which encompasses the Klaserie River. As the video shows, in one swift movement, all 4 of these big males bolt from the buffalo they are eating, clearly running from something. What do 4 big male lions run from, you might ask? The king of the jungle, that’s who! With an aggressive grumble and a stampede of heavy paws, these lions take to the bush, chased by what Bruce refers to as ‘the big boy’.

If you listen carefully to Bruce’s audio in the video, you will hear he says that these males are “getting stronger and stronger together, but they are by no means as strong as the dominant lion”. A few moments later, this dominant lion appears on the scene, and it is clear the young males know their place.

What an awesome example of nature at its best, and lions at their most primal. Take a look…