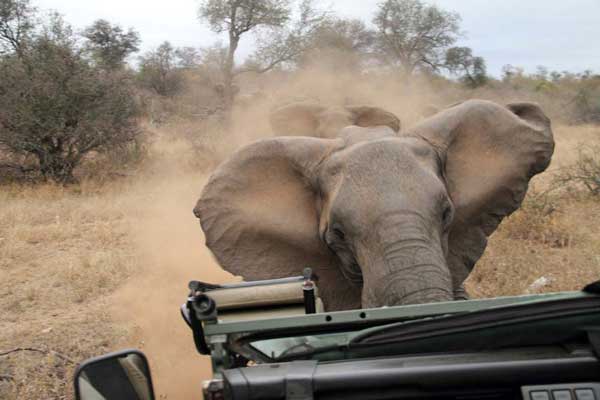 A few weeks ago a video emerged of a an elephant cow charging and colliding with a safari vehicle in the Klaserie area of the Greater Kruger Park.

Tim Driman, was a passenger at the time of the attack and took the time to give us the full picture of what actually transpired on that day.

“I was one of the passengers on the vehicle, together with my wife and our mentor guide who has >20 years Guiding/Guide Training to his credit, and is a specialist in dangerous game.

The video clip is heavily edited and only shows part of the total encounter. The female which actually hit us was about the same size as the matriarch and all aggressors had little calves and were lactating heavily.

We were actually there to walk and rack up more hours and face to face encounters on foot to qualify for our FGASA Trails Guide qualifications, as my wife and I are also FGASA Level 1 Field Guides. Unfortunately I had injured my Achilles tendon and we were driving at the time.

We too have  >20 years experience in the bush and I am a part owner of a “Big Seven” reserve in KwaZulu Natal, so we were all knowledgeable about elephants.

We started viewing the herd at a distance of 100 metres. We left them their natural path which they were following and a very good “escape route” which ran a good 25 metres in front of us. We also took the added precaution of parking off behind a natural trench of 750mm deep x 2.0mtrs wide. The engine was turned off as we interpreted that to be an aggressive action, so we chose to view these animals quietly.

All the books, training and theories are merely a guide, and one should only act in the moment, which is what we did and we chose to adopt a non-aggressive approach to this sighting.

The female with one tusk charged and stopped 12 metres from the vehicle, displaying all the “warning charge” characteristics which we accepted, and chose not to move, as it would only have antagonized her. She then returned to the herd which now also appeared anxious, so we again chose to sit quietly and allow them to calm down. The matriarch led a second charge which also stopped at the 12 metre point and stood kicking up dust and trumpeting, and the rest of the herd had joined them (> 20 elephants ).

While this chaos was playing out, the single tusked elephant (from the first charge) followed through, coming from behind the matriarch, and hit us with her head, then climbed onto the bull bar with her left knee. She thrust forward and her single tusk glanced off the bonnet, hitting the folded down wind shield, shattering it instantly.

Johann then started the vehicle and a pushing match ensued, resulting in our vehicle being pushed 4.5 metres into the rocks behind us with nowhere to go. Had we moved forward at that time, we were all of the consensus that it would have provoked a “pack attack” and we were not prepared to stress the animals any more than they already were.

We shouted (As you may hear in the clip) and she backed off to the group which had by now, blocked our way forward, so we again sat it out and waited for them to calm down.

It worked and the herd calmed down after about 10 minutes after the actual final attack. We returned the next day to the scene to conduct a thorough investigation and take measurements which is why my account is very accurate. I also took over 100 photo’s during the incident.

We were as perplexed as anyone else, as to what had provoked such behaviour and only the next day we learned that the area had been the scene of heavy helicopter activity a few days before.

That together with the fact the Kruger Park and Klaserie are joined and the Kruger has culled elephants from helicopters, could also suggest that the herd was already anxious. But their initial behavior never indicated any stress or anxiety.

We concluded that this elephant could have been in pain (She had only one tusk), she had a small calf and was still terrified from the helicopters buzzing around, that she behaved in this unusual manner. We have also watched our own elephants panic at the sound of helicopters in KZN. But unfortunately nobody had bothered to advise us of such helicopter activity a day or so before our arrival in that area.

It should be noted that we had a heavy calibre weapon, but in line with our formal training, when facing a charge, we gave her the benefit of the doubt and never used the weapon.

What we did conclude was

1) No animal or human came to any harm.

2) We had done what all training teaches.

3) We did not enter their space – they entered ours and the prerogative was theirs.

4) We carefully observed the body language of the animals, noted their tails, ears, posture etc.

We disproved the theory that when elephants keep quiet, fold their ears back against their heads and curl their trunks up under their chins, that those were definite signals of a follow through charge. These animals all flapped their ears and trumpeted loudly.

We believe that we handled the situation the best possible way under those circumstances. No one was hurt and an elephant’s life (and her calf ) were spared.

Johann and I are working on this full video and supporting still photo’s as a Power Point Presentation to be used as a training aid and requested by FGASA.

I do hope that I have put this matter into perspective and provided substance rather than just the “bare bones” of a situation which actually turned out positively without any injuries to animal or human. I am more than happy to correspond with any readers who would like to know more about this and have compiled a full account together with the appropriate still photographs of the entire encounter.”