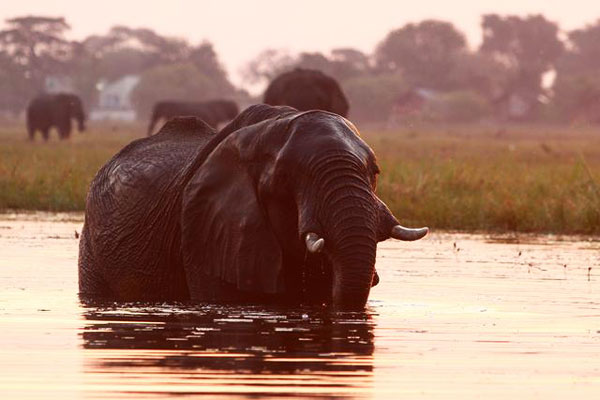 The Transfrontier Parks and Conservation Areas in existence in southern Africa are celebrations of unity and the preservation of crucial ecosystems; where national reserves and game parks have dropped their boundaries for the greater good of the migrations and movements of the species contained within their perimeters. In the case of Transfrontier Conservation Areas, as opposed to Parks, much of the adjoining landscape is residential and agricultural, occupied by villages of people who live in these gloriously wild locations in Africa. This detail emphasises the difficulty in obtaining the trans-boundary goal, as the importance of re-offering our massive mammals their rightful routes across countries is matched by the importance of not displacing or endangering families, communities and livelihoods. It can be, and has been, done; however, never on a scale as large as Peace Parks’ latest conquest. Environmental news: The Kaza Transfrontier Conservation Area.

Kaza (abbreviated from Kavango-Zambezi, after its bloodline rivers and their basins) is an area encompassing five southern African countries, thirty six protected reserves and parks, not to mention a World Heritage Site and Natural Wonder of the World. Borders for the Conservation Area are drawn within, and including, Angola, Namibia, Botswana, Zimbabwe and Zambia, which, to the knowledge of any keen naturalist, environmentalist, scientist, geologist, researcher, photographer, and safari-goer, are most of the African greats when it comes to sheer natural beauty, biodiversity, and wildlife density. A spectacular array of top parks and reserves, and the most sumptuous visions adorning this continent’s surface are enveloped within Kaza’s borders. The elephants of Chobe National Park can resume their ancestral routes that were once mapped out from eastern Angola to western Zimbabwe, spilling into Zambia’s illustrious Kafue National Park. Since Kaza’s establishment and the relinquishing of borders took place, a great number of elephants have followed their magnetic compass into the lost land of Angola, giving the weighted wetlands of the Okavango a lighter pachyderm footprint. Having only been inaugurated in March 2012, this 444 000 square kilometre TFCA has already re-enabled the ancient migration; a sure sign of the enormous impact this project will have on our fundamental environment.

The largest international protected area in the world extending its uniting arms across southern African terrain, Kaza hosts an unparalleled ecological diversity. From the lime-washed salt of the Makgadikgadi Pans, and Namibia’s arid plains, to the greener woodlands of Zambia, seasonal wetlands and perennial marshes of the Delta; a plethora of flora within a number of biomes are all found within its borders. Factually, these preserved areas offer 3000 species of plants, initiating an ecosystem that hosts the wildest assortment of mammalian, reptilian, amphibian, piscean and avian creatures of wildest Africa.

Such an almighty feat; one that brings these five countries together with one common goal, one mind to protect and to embrace our natural marvels. This project is the result of a combined effort between the governments of these countries, the unmatched generosity of worldwide funders, and the unwavering commitment of Peace Parks Foundation. One of the highest hurdles in a project such as this is enabling human inhabitants to live in harmony with their animal neighbours, guaranteeing the health and safety of both parties. In October 2010, a restraining line was erected around a small village in rural Zambia to deter lumbering, leathery elephants from destroying cultivated land and wrecking havoc for the small community. Proudly, this simple structure has averted a potentially dangerous interaction between man and beast; yet another gold star for the work the Kaza team has put in.

The five partner governments rotate the coordination role bi-annually, as they each legitimise their Integrated Development Plans, which are the national initiatives that contribute towards the value of Kaza. This rotation policy ensures that each country is afforded the opportunity to lead the implementation process. Zambia, currently holding the torch, has recently (August 2012) announced that its Minister of Tourism and Arts has officiated the opening of the Ngonye Falls Community Partnership Park, which basks in the foreground of the remarkable Ngonye Falls itself. This partnership is represented by traditional leadership, the local community and the Zambia Wildlife Authority – a perfect portrait of what the healing hand of humanity is capable of when there is a common goal in mind.

Zambian senior chiefs have expressed the importance of teaching younger generations, leading by example and taking action to conserve our natural resources, as the mutual benefits of the ecotourism industry speak volumes in the face of poverty and suffering. Kaza TFCA is capturing the hearts of travellers from around the world, promoting economic wealth through job creation, and allowing the long legs of elephants room to roam. This is a tripartite agreement that has dug its heels deep into African soil, and I, for one, am waiting in eager anticipation to see what the future of this transfrontier project holds.