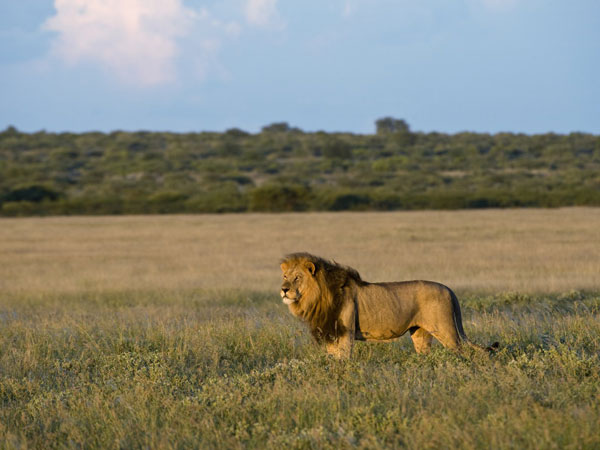 Haaslip, the Afrikaans word for “harelip”, was the name given to a very distinctive black-maned lion of the Kalahari. He was not only physically unique, but he was somewhat of a rogue and took on desert life very much alone; a behaviour that defies any scientific research of Panthera leo. Visually, there was evidence that this extraordinary, large male had suffered an injury during a fight for domination that had left him with a torn upper lip. As the wound healed, it drew his lip up towards his nose, creating the semblance of a harelip, or cleft palate. An unusual sight, this is what defined the lion upon the group’s early meeting with him, and the esteemed male was christened. This is the latest of the Kalahari Dune Kings: Introducing Haaslip.

Something that soon characterised Haaslip and encouraged Professor Eloff’s interest in this particular male was his unexplainable sexual behaviour. Haaslip engaged with many participatory females over the nine years that he was tracked in the Kalahari. Not only was the frequency of his copulations astounding, but the relationship he had with the lionesses he wooed and the length of his lifetime he spent reproducing. Well, at least, engaging in the act of mating – it is at times an unstinting effort for lions, as only twenty percent of accouplements result in procreation. So, here was a Dune King, as true to the title as it gets: Haaslip, bearing the physical deformities of battle, a non-conformist to the typical social structure of his kind, and a Casanova of the Kalahari. Eloff shares with his readers the numerous occasions over almost a decade that he tracked this lone ranger; at times finding him roaming solo, other times, courting various females, and eventually, in his older days, as a dominant member of a large pride.

In his book, Hunters of the Dunes, Eloff introduces Haaslip as “Don Juan of the Kalahari”; an amusingly accurate reference to the Spanish philanderer who devoted his life to seducing an array of women and took pride in his apparent irresistibility, continuing his female conquests right into the later stages of his life. Don Juan’s life was also portrayed to have been littered with violence and gambling, the latter obviously not relative in the case of Haaslip, but the depiction of a maverick certainly fits the bill.

Upon their first meeting at Blouholte, a waterhole between Auob and Nossob, Haaslip was the sole male flanked by two frisky lionesses and one younger female. Eloff estimated this rugged, yet beautiful male to be around five or six years of age; the prime sexual age for a male lion. After witnessing the powerful take down of a springbok ram by one of the females, it became obvious that the black-maned king was indeed the boss of this pride, and a lioness named Nelsie was his number one. In a perplexing turn of events, Haaslip followed a flirting lioness away from the carcass and over the nearest dune; however, the female was Ellie, the not-so-far-behind second in rank. A night of passion followed, as the pair mated more frequently than Eloff had witnessed before. Queerer still, the next morning’s events solidified this male’s reputation. Haaslip not only demonstrated impressive stamina, but he very eagerly accepted an invitation to mate with Nelsie who pranced right up to the loved-up couple, affectionately gestured toward her female companion before offering herself to Haaslip. There was no snarling and no flare of jealous claws, as he trotted off to a neighbouring dune with his new mate.

With anticipation, Eloff and his team roared over the familiar red sand five months after their introduction to this unusual pride, eager to catch a glimpse of Haaslip’s offspring. They were confronted with the two females, a hopeful sign, but it was with disappointment that they realised the ladies were alone. The handsome brute was nowhere to be found, and there were no clumsy cubs peering out with investigative eyes. It was a mystery as to whether the cubs had died, or whether they had been born at all. It seemed that Eloff had timed the reunion well, though, as that night Ellie and Nelsie set off with purpose and after an intensive six day trek, it was with what must have been intention that the lionesses joined their beloved Haaslip.

These rendezvous never lasted more than a few days before the desert roamer took to his lone ventures, and throughout his life, was spotted with various prides and numerous females. Astonishingly, Haaslip continued to find mates despite his age and seemingly uncertain status. Once, in the light of the blazing Kalahari sun, Eloff spotted the renowned male quietly resting under a grey camel thorn tree; a thin and dishevelled figure, a dull coat and disinterested eyes. Clearly something was wrong, and the team acknowledged a quiet goodbye as they drove off; however, it was only the first time this Dune King faced grim circumstances before gathering his strength and making a full recovery.

A truly remarkable individual, Haaslip is worthy of the recognition and remembrance given to him by Eloff. Rebelling against the natural order of things, he dabbled, but never committed to any pride he came across. He most certainly has fathered progenies who are today’s desert rulers, and one can’t help but wonder whether his independent nature will live on in his bloodline, or whether Haaslip was a rogue lion by circumstance. Unlike Eloff’s others, it remains a mystery as to when or how this lion ended his life, but the last recorded sighting of the black-maned beauty was when he was in the company of a pride of lionesses – a perfectly suited last memory of the Kalahari Casanova.

Contact us for exceptional accommodation in the Kalahari, and for tailor-made itineraries in both South Africa and Botswana’s shares of this renowned desert.